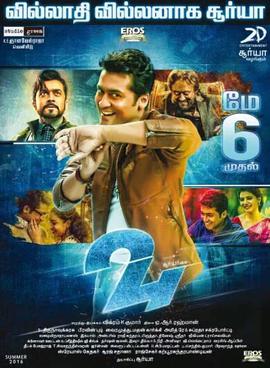 Plot:
A scientist discovers a time travel device (the watch named 24) which is wanted by his evil brother Aathreya, however a few years after the watch is acquired by the scientist’s son. Aathreya then kills the scientist and his wife and he then time travels, so he can fight with his nephew for the watch.

Overall Review:
Director Maestro Vikram Kumar displays his mastery yet again after Manam: This time with Sci-Fi fantasy film 24, having Singham star in Triple Role. Film deals with the idea that what a man can do if he gets the power to change the history. Movie is classy hollywood style thriller with loads of entertainment and unpredictable twists and turns that will surely win you over. Film has shades of Mr. India but biggest strength of the movie is its concept especially the first half & climax along with the vibrant visuals that will definitely put you on the edge of the seat. I would say one of the best Sci-Fi Thriller ever made in the History of Indian Cinema.

Performance & Technical Review:
Suriya, in triple roles this time, delivers knockout performance. He is equally believable as both the hero and the villain. Samantha looks beautiful throughout the film. Girish Karnad, Ajay, Sathyan, Mohan V. Raman and Saranya Ponvannan are playing the supporting roles. Vikram Kumar has handled the subject with brilliance. The VFX of the film is first rate. Music from A.R Rahman is average. Tirru and Prawin Pudi have brilliantly done their jobs with cinematography and editing respectively. A little editing in the run-time of the would have helped.

PDF Verdict:
24 – A film with Unique Concept, Engaging Screenplay, Crisp Editing, Thrilling Moments, Production Designs & Electrifying Performance from Suriya is worth every penny. Make sure to visit this Time Machine before it flies away.